"A multi talented musician who produces a range of truly diverse and eclectic work." – ThisWeek London

“With an ear for the cutting edge and a technique to match, Alex Roth's music can be considered at the forefront of London's newest art music.” – Edge Music show, Shoreditch Radio

"One of London contemporary music’s most innovative and impressive talents." – Daniel Paton, musicOMH

“Alex Roth's guitar playing involves the fascinating creation of texture. He has absorbed the colours and vocabulary and trick-box of guitarists as diverse as Bill Frisell and Fred Frith, and can take the listener on a journey in every tune.” – Sebastian Scotney, London Jazz News 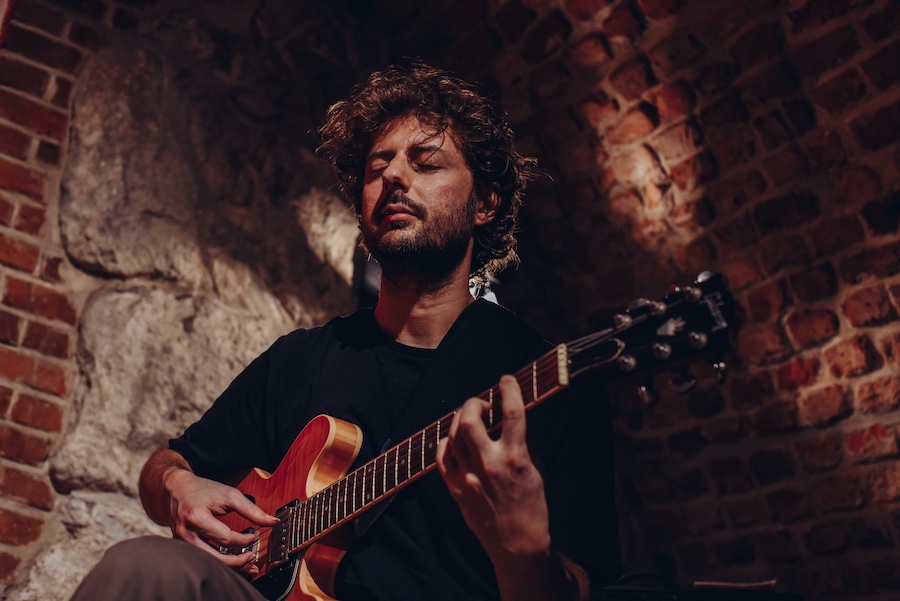 Born in Detroit, raised in London and now based in Kraków, Alex Roth is a composer, guitarist, producer and interdisciplinary collaborator who over the last decade has earned a reputation as “one of contemporary music’s most innovative and impressive talents” (musicOMH). His diverse body of work encompasses improvised performances; a wide range of concert music from solo to orchestral compositions; scores for dance, theatre and film; leading numerous bands; and producing electronic music. He has collaborated with some of Europe’s leading experimental musicians, such as John Butcher, Arve Henriksen, Savina Yannatou, Kit Downes, Mikolaj Trzaska and Olga Szwajgier.

Alex's compositions have been recorded by the London Symphony Orchestra and London Sinfonietta, and the 20+ releases in his discography also include collaborations with singer/songwriter Alice Zawadzki (whose debut album China Lane Alex co-produced), Mercury Prize nominee Laura Jurd's Human Spirit, and Orcadian fiddler/singer/songwriter Catriona Price, among other recordings on labels such as Edition, Whirlwind, Diatribe and NMC.

Alex has played at festivals across Europe with Blue-Eyed Hawk, recorded with electric guitar ensemble Future Currents, and directed multimedia performances with radical Sephardic music ensemble Sefiroth. He releases experimental electronic music and audiovisual NFTs as Supersigil, leads an improvising trio with acclaimed Polish musicians Waclaw Zimpel and Hubert Zemler, and founded MultiTraction Orchestra as a platform for remote collaboration among a global community of experimental musicians. The latter group’s debut single "emerge entangled" was constructed from improvisations recorded under COVID-19 lockdown by 27 musicians from 15 cities in 8 different countries. Hailed as "powerful, immersive and intense" by Jazzwise, the track has been played on BBC Radio 3, Gilles Peterson's Worldwide FM show and other stations across the globe. The Orchestra's debut album will be released later this year.

A prolific interdisciplinary collaborator, Alex often works with choreographers, poets, painters, sculptors, theatre- and film-makers. He can be heard on numerous television soundtracks across BBC, ITV and Channel 4, including Jon Opstad's score for Black Mirror - White Bear, and has featured on radio stations worldwide.

Alex’s recent scores include Celina Liesegang and Arturo Bandinelli's movement film VISCERA; Kasia Witek's dance performances one wall of me and Solastalgia; Théâtre Volière's Cavafy-inspired Ionic; and the site-specific, augmented-reality app Memory Score. This year he is launching Zyla, a multidisciplinary (meta)label for experimental art of all kinds.

Alex holds a BA in composition from Dartington College of Arts and a MA in jazz from the Royal Academy of Music. His many accolades include the Dankworth Prize for Jazz Composition and The Irish Times “Best Jazz Album”  award, and a Creative Scholarship from the City of Krakow. He has been a British Music Collection “New Voices” artist, a Serious “Take Five” artist, and an LSO Soundhub Associate. He was also shortlisted for a BASCA British Composer Award and nominated with Blue-Eyed Hawk as “Best Newcomer” in the Parliamentary Jazz Awards, among other honours.

Alex has received commissions from BBC Radio 3, choreographers Kasia Witek and Celina Liesegang, London Jazz Festival, and radical Polish-Jewish art collective FestivALT. He has been composer-in-residence at the Galicia Jewish Museum in Kraków; with dance company Sounding Motion; and with improvising chamber ensemble Notes Inégales in partnership with the Institute of Composing. His work has been supported by Arts Council England, British Council, Sound and Music, Help Musicians UK, PRSF, Canada Council for the Arts and Asylum Arts (NYC).

Alex has performed at many of the UK's most renowned venues like the Royal Albert Hall, Southbank Centre, and the Barbican, along with such festivals as the BBC Proms and Love Supreme. He has also performed in the US and across Europe at such festivals as Dublin Electronic Arts Festival, Unsound (Poland), GAIA (Switzerland) and Gogolfest (Ukraine).